The International Workshop Rethinking Simmel on Culture, Modernity, and Alienation (6th and 7th June, 2022, Vienna – Buenos Aires) aims to revisit some of the core problems of Georg Simmel’s thought from hitherto underexplored perspectives. It inquiries into aspects of legacy and timeliness, examines Simmel’s relationship to critical theory, and puts to the test the philosopher’s continued potential to tackle today’s pressing questions.

The increasing interest that Georg Simmel’s writings have received in the last four decades contrasts with the relative oblivion into which his work was casted shortly after his death and in which it remained until the 1980’s. The philosopher, who had long been denied a place in the pantheon of classical social theory, was back then granted the award of the “first sociologist of modernity” – a recognition he still rightfully holds. This “Simmel Renaissance” coincided with and was partially propelled by the subjective turn in Social Sciences and Humanities: the fragmentary, decentred, multivocal, and relativist aspects of his theorisations on modern culture were emphasized and aligned with contemporary approaches. Timeliness – Aktualität – presupposes a “secret agreement between past generations and the present one”, Walter Benjamin said in a widely discussed passage.

It is partly because of the non-systematic, heterogeneous, and vast character of Simmel’s work that the question concerning his relevance to our present remains far from having a definite answer. Significant areas of his œuvre have received insufficient attention: his – repeatedly reformulated – book on historiography and his various publications on Goethe are noteworthy examples of territories that still demand to be explored. Cardinal concepts that pierce through chief essays have either been neglected – “division of labour”, for instance – or unilaterally handled – “mood”, for example. Although Simmel’s theoretical connections with so divergent intellectual currents such as the George-Circle and the Chicago School have been tackled, little has been said about his involuntary, yet undeniably decisive contribution to the Marxist critique of György Lukács, Ernst Bloch, Siegfried Kracauer, Benjamin and Theodor W. Adorno. As Hans-Peter Müller claims in his Introduction to the 2018 Simmel-Handbuch, Simmel’s influence on critical theory is “ominous because of its secrecy”. The pressing nature of these heretofore rather unattended problems suggests that perhaps new agreements between the philosopher and us ought to be brought into light.

For information on how to attend please write to rethinkingsimmeI2022@gmail.com 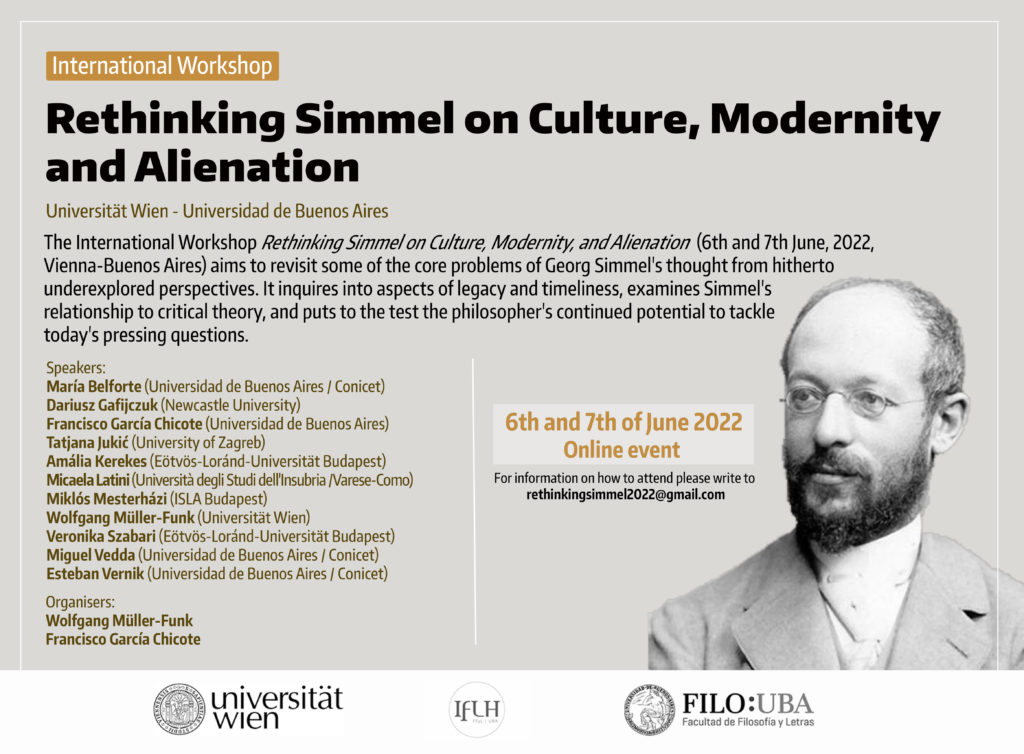 The archive has been closed for 1715 days!